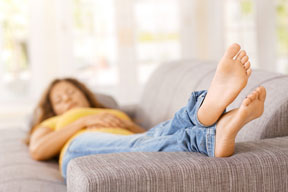 (NewsUSA) – Most people will walk the equivalent of three times around the earth in their lifetime. That’s a huge amount of wear and tear on your foot’s many bones, joints, tendons, ligaments and muscles — and, more to the point, it increases the potential that you’ll develop a very painful and/or unsightly case of toenail infection.
Specifically, we’re talking onychomycosis, the medical term for fungal infection of nails. An estimated 35 million Americans have it, and you can understand why — despite having spent more than 0 million in 2010 alone trying to get rid of it — they don’t much like discussing it: Toenails turn embarrassingly yellow and crumbly from fungi that squeeze under them and then hide out.
And, oh, yes, for reasons not clearly understood, the fungi dig in even deeper as we age.
“Feet are the most neglected body part until there is a problem,” says Dr. Krista Archer, a Manhattan foot specialist and podiatric surgeon.

Those Most At-Risk
While some people are genetically prone to onychomycosis, others — including swimmers and athletes — unintentionally leave themselves open to it because of certain behavioral patterns.
Maybe they go barefoot in public areas. Or maybe their feet are often damp — just the environment, experts say, that fungi thrive in.

Treatment Options
As a recent article in Podiatry Management makes clear, there are a few drugs that tackle the problem. However, their use “must be balanced against the risk of unpleasant side effects that include gastrointestinal disorders, headaches and minor skin rashes.”
That’s one reason many experts are so excited by what they describe as a “breakthrough” topical treatment called Kerasal Nail (www.kerasalnail.com), now available in most drug stores. The colorless liquid restores the appearance of damaged nails by increasing nail hydration and exfoliating the nail plate — and in so doing, clinical studies have found, creates an environment that discourages fungal growth.
You should start seeing visual signs of improvement after about two weeks. Depending on the initial severity and the extent of the nail’s damage, though, continued treatment is recommended for three to six months.
One caveat for hedonists: Nail polish is verboten while using Kerasal Nail because it prevents its absorption.

© Copyright 2019 Unofficial site of Natural Nails
All rights reserved. This site is in no way affiliated with or endorsed by Natural Nails. It exists as a compendium of supporting information intended for informational purposes only.

If you want to buy this website, please don't hesitate to contact us via e-mail: domain (dot) sales (dot) org @ gmail (dot) com